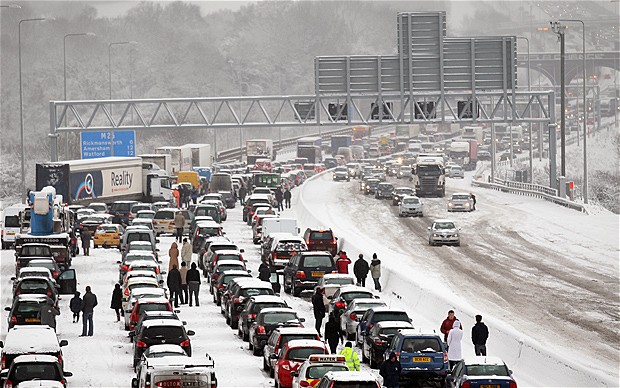 There were plenty of warnings about possible weather problems before I set off from Haverfordwest in the SW Wales to Stansted airport on December 18th. There was very little snow in Pembrokeshire and the airport was open. There were absolutely no problems up to the M4 exit for Slough.

Photo taken on my iPhone of the M25 standstill[/caption]

Then it all started to slow down and by the time I got to theM25 exit on the M4 the traffic stopped. We managed to somehow move a little so I was mostly on the M25 slip road but that was it until about 16.45 when we slowly started moving. We more or less crawled on the M25. Managed to see the remains of the burned-out people carrier that caused all this mess - it was just near the M40 junction on the M25.

The Highway Agency was warning there were problems on the northbound M11 so I decided to take the A10 and A120 roads that ended up being very snowed up but at least empty with no accidents on them. I arrived at the B&B near Stansted called Puttocks Farm at about 8.30pm - about 10 hours after I left Haverfordwest. The trip usually takes me 5 - 5.5 hours.

To top it all the next day I couldn’t get a taxi to take me from the B&B to the airport about 10 minutes away. They were taking orders only after 2pm but that would be to late for me. Luckily the B&B owner gave me a lift so I didn’t have to leave my car at the airport costing me £13/day. And to top that as well the place was 2 hours late due to some engine problems - apparently something refused to start up in the plane. The passenger next to me remarked that the pilot just couldn’t find the reverse gear and in the end somebody else told him.