Defined by the British tinnitus association as a ringing, whistling, buzzing and humming in the ears and/or head without any external source it has been a bit of an ailment for me for over a year now. It all started a few years back when I started to get presumably viral related Ménière syndrome attacks. They appeared about once or twice a year and got worse towards the end - the last one “flattened” me for about 12h with a few days recovery after that. Ménière syndrome are more or less severe attacks of vertigo, severe tinnitus, nausea with no hearing loss. There are probably more definitions around so please bare with me. The ones I described are the most obvious.

Auris Medical made a sound that tries to reproduce what tinnitus sounds like on top of music: tinnitus

After the last attack I had in April 2008 I was left with persistent undulating tinnitus. It wasn’t as severe as during the Ménière’s attack but it was very unsettling. After a few weeks it was still there and it slowly got me worrying. Whent to see my GP who referred me to a ENT (Ear nose and throat) specialist in Carmarthen. Since then I have been there for a few visits and also had a CT scan a couple MRI scans and various tests performed on me, much to my frustration at times.

I was told that the tinnitus is not going to be permanent and that it is due, in my case, to fluid build-up in the inner ear, however this was more of a presumption than a definitive diagnosis.The best thing I was advised to do was to get used to the sound (while I have it) and to not get frustrated or depressed by it.

The times, when you usually hear it the mos,t is in the evening and morning. This also includes during the night if you happen to wake up. At the beginning the tinnitus was so bad that I was waking up just from it. Going back to sleep after that was quite a job. The resulting insomnia can cause much more severe problems and I hope they weren’t that bad with me.

I was told to visit the RNID website to get more information on how to help myself. The best way is to listen to sounds that are similar to the tinnitus sound in frequency with the aim to “drown out” the tinnitus sound. It is also important not to put the therapeutic music on to loud so it is distracting in itself and also not to quiet as to not have any affect at all. There are various “pillow” speakers available to buy but I wanted something a bit more practical. I already had all my CD collection in digital form and loaded up on my 160 GB iPod Classic. So I found it impractical to start buying special players with special speakers for this purpose. I wanted to buy something I could use for other purposes, for example to wake me up in the morning. I also wanted something that would turn itself off after x number of minutes so the sound playing won’t be going on all through the night. 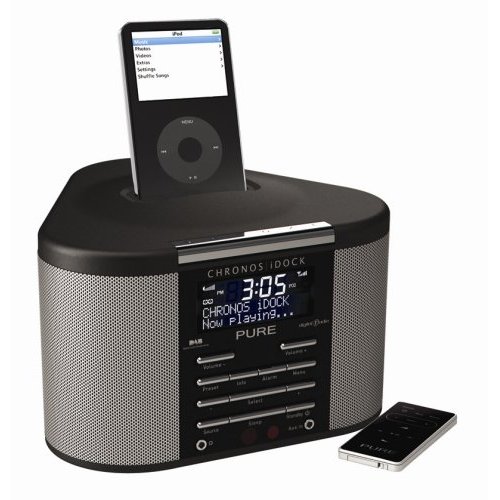 I found a very good solution in the form of a product called Chronos iDock from a company called Pure. Pure is a British company that makes cutting edge audio equipment. The Chronos iDock is a FM and DAB radio with an iPod docking ability on the top of the box. It also has a sleep button that shuts down the device after 15, 30, 45,  60 or 90 minutes. The DAB system proved to be a special blessing as there was a radio station that was test transmitting some great Birdsong natural sounds. Unfortunately this test transmission stopped on June 1st 2009. The service bacame so popular it has sprung-up this website with the ability to purchase the song online. However the version of the song on the website is not the same as the one that was transmitted on that DAB channel.

This brings me to the songs themselves. I would advise to stay away from iTunes’s DRM afflicted music downloads and go for Amazon’s MP3 website mp3.amazon.co.uk. Unfortunately this is not available to other countries - the last time I heard it was only available in the UK :-(

In any case I would suggest sounds that are purely natural and are not “contaminated” with human music and/or talking. Beware and try-before-you-buy as you might find yourself buying something you don’t like. Amazon’s MP3 store has an excellent preview (or should I say pre-listen) feature. The RNID website suggested a few stress relieving CDs like Pure Calm, but I found them unsuitable for my problem.

There is an alternative to the above suggestion if you don’t want to buy this equipment and you do have an analogue radio at home. Turn the volume down to a low level and tune the radio FM receiver to a frequency with no detectable radio stations. you should hear just the familiar buzzing sound. That’s it! I, however, have not tried this myself as I don’t have an old radio like that at home anymore. Worth a try though. 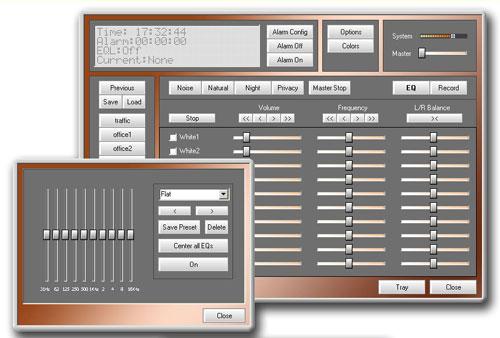 There a bit of useful software available to help you combat tinnitus called Tinnitus Masker Pro. This app by Vectormedia software will allow you to mix and match different pre-installed sound like the sound of rain, white noise, fire and so on, to create your own. You can also modify the volume,  frequency and left/right balance. There is also a feature to record your own sounds. There is a Standard and and a Deluxe version available.

Don’t forget there are many reasons why tinnitus occurs. In my case it is constant but gets worse in certain circumstances. As  side effect of it I will also experience hyperacusis - where I will find certain sounds extremely irritating - and I mean irritating enough that I have to leave the area straight away. I remmeber once going to a busy restaurant not long after having a Ménière attack and I found the surround noice from people talking so irritating I had to leave the place immediately.

If you are in that sort of situation the best thing is to just remove yourself and go somewhere quiet. Sometimes ear plugs with help but it won’t make the tinnitus quiter - remember, it is originating from within you and is not from an external source.

There is currently no effective treatment for it. There is some pretty invasive surgery that as far as I know in certain cases can result in permanent deafness. There is some research ongoing but with no imminent drugs on the market. Read the related articles at the end of the post from BBC News. I have done some research and there was some talk about the benefits of herb Gingko Biloba. Also some discussion over caffeine was made but I read that in some cases caffeine made the tinnitus worse and in other cases, better. Just try it out for yourself. In my situation stress, flu and viral diseases (decreased immunity) made the tinnitus worse so keeping in general good health is a great idea. However twice before I had the Ménière attack I actually did some exercise but that could just as well be due to the exercise triggering a flu-like disease concentrating on my inner ear. I have since done lots of exercise in form of [intlink id=“1229” type=“post”]hill climbing[/intlink], trekking and skydiving with absolutely no problems in the aftermath.

My GP gave me some buccal tablets containing prochlorperazine - to be more precise these were not specifically for the tinnitus but to prevent a possible Ménière attack. Not sure if they are of any use. They are supposed to prevent and eliviate nausea and vertigo.

I would also suggest joining the British Tinnitus Association. The annual membership is currently £15 for the UK and £20 for other countries. You get lots of useful information and some insight on research into tinnitus.

As described earlier you should avoid areas where you expect to feel uncomfortable. If you experience hyperacusis in crowded areas then best to avoid them or use ear plugs you can get from your local pharmacy. Listening to music in general should be OK, avoid loud sounds and loud music, especially if listening on headphones as this, in itself, can cause hearing loss and tinnitus. I play the acoustic guitar myself and have no problems with the vibartions or the frequency. It was also fine once I switched to an electric guitar.

That is all. Keep well.